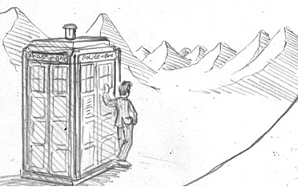 The 10 Doctors is a Doctor Who Fan Webcomic by Rich Morris. The comic is notable for its epic scope and for featuring, in addition to what was then all the eponymous 10 Doctors, nearly every companion, major villain, and recurring character to appear in the series up to 2007. The references come thick and fast, so if you don't know the difference between a Renegade Dalek and an Imperial Dalek, be forewarned — but not discouraged.

To briefly summarise — the Tenth Doctor, in a bad mood following "The Runaway Bride", has gone to a luxurious world called the Eye of Orion to cheer himself up... only to gradually find eight of his previous selves having all arrived at the same time along with their companions. While they begin to investigate what's going on and why they've been brought together, the Eighth Doctor (the odd one out) is on Gallifrey, investigating mysterious goings-on which seem to involve the recently-disappeared Daleks. And then things get complicated...

It can be read online

, or downloaded in PDF and CBZ format

For other works by this author, see Rich's ComixBlog and Yet Another Fantasy Gamer Comic.

Not to be confused with the web series The Ten Doctors, which has a similar premise but a different plot.

The 10 Doctors provides examples of:

After a bit of exposition, One eventually caves and calls it "timey-wimey".