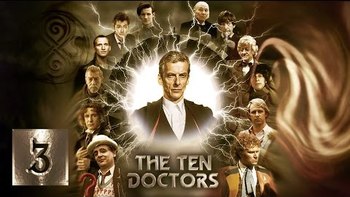 Created using Stock Footage, (mostly from Doctor Who, naturally) Manipulative Editing, and some original audio, The Ten Doctors puts all the ten Doctors that existed when the first episode was created in a single adventure together, with the rest appearing later on.

When the first two Doctors are kidnapped under mysterious circumstances, the Third Doctor is contacted by a voice claiming to be Lord President of Gallifrey, who tells him that he and his other selves must rescue his first two incarnations or they might all cease to exist. The Seventh Doctor is given the job of contacting the rest of his incarnations, which is easier said than done as it requires a very powerful signal. Fortunately, it works. The Fourth, Fifth, Sixth, Seventh, and Tenth Doctors are sent to UNIT HQ to rescue the Second Doctor from his battle against Omega's anti-matter monsters. The Tenth Doctor is driven away in a jeep by a random UNIT soldier while the rest of the Doctors flee from the crossfire, uncertain how to deal with the situation. Suddenly, a new enemy enters the battlefield...

The Daleks recognise the Doctors and open fire on them. They respond by picking out red lightning guns to shoot the portal from which the Daleks have emerged. The Tenth Doctor arrives in his jeep with a strange device which, once activated, shoots out an energy beam that destroys all the Daleks. Even he is surprised that it was so easy. With the Second Doctor now safe, The man claiming to be Lord President sends the Doctors to rescue the First Doctor, who has been found by the Third, Eighth, and Ninth Doctors in Cardiff Castle, 1415. Unfortunately, they arrive just as the castle is attacked by Sontarans. The First Doctor has returned to the safety of his TARDIS and watches on his scanner screen as the Second, Third, Fourth, Fifth, Sixth, Seventh, Eight, Ninth and Tenth Doctors are all shot by Sontaran troopers.

"Lord President": Killing you once was never enough for me, Doctor. How gratifying to do it ten times over!

The First Doctor activates a teleport to bring the other Doctors into his ship, where they wake up uninjured. He also causes a TARDIS exterior (containing all of the Doctors' TARDIS interiors) to materialise in the console room. Ian and Barbara just look on, puzzled by the whole thing. The Doctors go to their respective console rooms, Reverse the Polarity, and zap the Sontarans' probic vents with temporal energy, killing them and blowing up their mothership. The Doctors are once again contacted by "the Lord President", who tells them that it is time for them to finish their mission. However, they notice an anomaly in the President's signal and trace it to a space portal which they decide to investigate, despite "the Lord President" calling it irrelevant. It leads them to the planet Raston, heart of the Dalek-Cyber war, which looks very much like a quarry. They arrive in the middle of a three-way battle between Daleks, Cybermen, and Raston Warrior Robots. The Doctors are, once again, recognised and shot at by the Daleks and Cybermen, who are themselves obliterated by the Raston Warrior Robots. Interestingly, the robots don't target the Doctors and fly away. The Doctors realise that the portal is hidden above them and use their Sonic Screwdrivers to destroy the invisible barrier covering it and enter the dark dimension that lies on the other side. They find themselves in a dark, empty void, where they are greeted by the voice of "the Lord President", who reveals that he is actually from a parallel reality created by the Doctor when he ended the Time War by activating The Moment and destroyed Galifrey. His plan has actually been to gather the Doctors in one place so that he can steal their life force. He also reveals who he really is.

"Lord President": I am the Doctor.

The Evil Doctor tells the Doctors that they wont live to see their successor. The Third Doctor then reveals that they've already met him. He contacted them all before the adventure began, warning them of the Evil Doctor's plan. He then aided the other Doctors behind the scenes, making sure that there was a jeep with an anti-Dalek device at UNIT HQ, altered the Sontaran weapons so they wouldn't kill the Doctors, and reprogrammed the Raston Warrior Robots to ignore Time Lord physiology. The whole story was just an attempt by the Doctors to rescue the future versions of the first two Doctors, which the Evil Doctor had kidnapped. The Eleventh Doctor arrives in his TARDIS, along with the War Doctor and a future version of the Tenth Doctor (counting as a separate incarnation, as he once regenerated while keeping the same face). The Evil Doctor reveals the absorption chambers, causing the Third Doctor to lose confidence for the first time in his life, which he says goes back "several thousand years." This surprises the Fourth and Tenth Doctors, as they believe they are nowhere near that old. However, they decide to ignore this revelation and send the two kidnapped Doctors back to their own time, hoping to avert the absorption...but it has already begun.

The Doctor had ten more incarnations before his childhood on Gallifrey. It was the last of these Doctors who sealed the rift in the Medusa Cascade, saving all of creation. He was then attacked by the Medusoid swarm, described by the Third Doctor as "a hairy jellyfish", and injured beyond regeneration. But he was saved by the Time Lords, who gave him a new regeneration cycle, de-aging him into a young child. The Doctors are understandably confused by their lack of recollection of these events. Turns out that the Evil Doctor has already absorbed his first regeneration cycle, erasing it from history.

Evil Doctor: Do you miss them, Doctor? Do you feel their loss? Did you spend your nights alone in the dark crying for what you had lost?

The Doctors activate their Sonic Screwdrivers, forcing the Evil Doctor to show himself as a huge, holographic head. They are suddenly contacted by the Twelfth Doctor, who - with the help of K-9 - has managed to bring all of The Doctors' TARDISes into the Dark Dimension and temporarily immobilise the Evil Doctor. They now have exactly 11:05 minutes to stop him. The Eleventh Doctor reveals that he has a plan: Avoid the destruction of Gallifrey by freezing the planet in another universe. It works. Gallifrey is saved, the fracture of realitywhich created the Evil Doctor is averted and he ceases to exist. As they celebrate their victory, the Fourth Doctor and K-9 receive a message from one of the Doctor's future incarnations.

Bowties, and scarves, are cool.

The series is not related to the webcomic The 10 Doctors, though it has a similar premise. It doesn't have anything to do with the trope Nine out of Ten Doctors Agree, either.