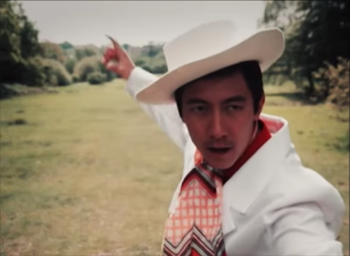 "Dalekor, you fiend!"
While Doctor Who has been an international pop-culture mainstay ever since its 2005 revival, for much of its lifetime its cultural relevance was limited to the British isles. However, attempts were made to expand its reach; most famously was the 1996 TV movie, intended to help the show reach America, but less-well known is the Japanese version from the 1980s. Created by a Japanese Tokusatsu production company on license from the BBC, this adaptation of the show pits Doctor Who against foes such as Dalekor and his Cyber Men, armed with his fists and his Sonic Screw Sword.
Advertisement:

...Okay, none of that is actually true. Instead, Japanese Doctor Who is a 2014 short film by London-based filmmaker Joshua Kahan; a No Budget Affectionate Parody of Doctor Who and the Tokusatsu genre, the short — styled as a clip from an episode of the fictional adaptation — draws inspiration from shows such as Super Sentai, Kamen Rider X and, of course, Toei's Spider-Man.

The short can be watched here

Japanese Doctor Who provides examples of: