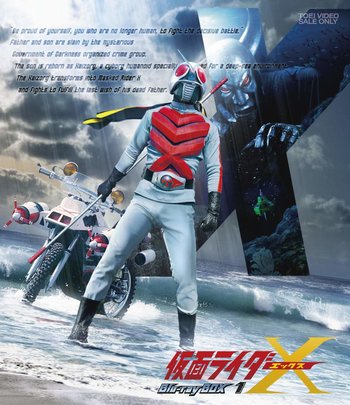 Kamen Rider X was the third Kamen Rider series from Shotaro Ishinomori, there was also a manga released around the same time.

Keisuke Jin is a guy living in Japan with his father and fiancee, his father is a famous inventor as well as a judo expert. His father has been working on a motor that could be revolutionary. However, the latest evil organization Government of Darkness (or GOD for short) wants the invention. Jin's fiancee is a spy for GOD and executes both Jin and his father, but not before Dr. Keitaro manages to SOMEHOW drag Keisuke Jin all the way into his lab and install the engine into him. Dr. Keitaro dies shortly after, but not before leaving his son the gear to become Kamen Rider X. X vows to destroy the Government of Darkness, and avenge his father.

Kamen Rider X has had two theatrical releases: an movie version of episode 3 also titled Kamen Rider X, and Five Riders Vs King Dark where he teams up with his predecessors from the original series and Kamen Rider V3.