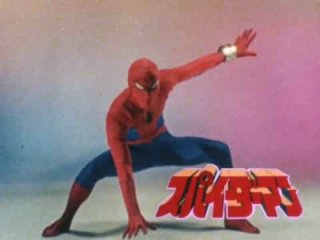 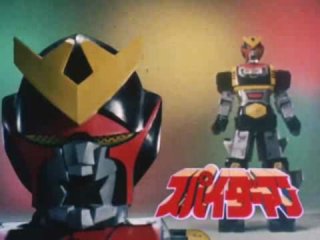 ...well, you're in for a world of difference!
"An emissary from Hell. Spider-Man!"
Advertisement:

Spider-Man (スパイダーマン or Supaidāman) was a Japanese live-action tokusatsu version of Spider-Man born out of a short-lived licensing agreement between Marvel Comics and Toei. Which also resulted in the anime version

In this version, Spider-Man is Takuya Yamashiro, a young Japanese motorcycle racer who's given blood by a 400-year-old Human Alien from the planet Spider, letting him turn into Spider-Man in order to defeat the Iron Cross Army in order to avenge his father. He has the basic costume and powers of the Western version (though he tends to shout attack names to use webs, and the webs and costume come from a bracelet) but little else is similar.

The show was produced in 1978–79, between the second (J.A.K.Q. Dengekitai) and third (Battle Fever J) Super Sentai shows and has many similarities to that franchise: Spider-Man has a car called the Spider-Machine GP-7 and a Humongous Mecha named Leopardon, and the series follows the familiar formula of a single organization sending out a Monster of the Week which gets defeated, then grows to giant size, and is defeated by the hero in the robot. In fact, it introduced this concept to Super Sentai — the first two shows (Himitsu Sentai Gorenger and J.A.K.Q. Dengekitai) didn't have giant robots.

The series is not related in any way to the earlier Spider-Man manga by Ryoichi Ikegami, although it did have a few manga adaptations that were published in different children's magazines. Incidentally, Spider-Man's giant robot Leopardon did make it to the United States as part of the Godaikin toy line.