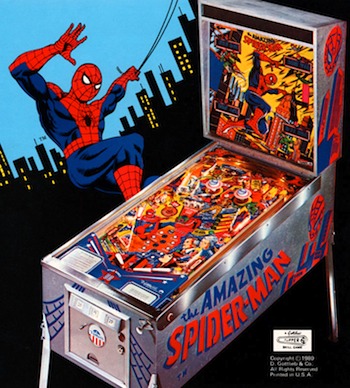 The Amazing Spider-Man is a Physical Pinball Table designed by Ed Krynski with art by Gordon Morison. it was developed by Gottlieb and released in 1980.

The pinball itself is named after the character and long-running comic book series, and is the second table featuring a licensed Marvel Comics character from Gottliebnote After The Incredible Hulk. The backglass and playfield are festooned with Spider-Man's Rogues Gallery and major supporting characters, including the Green Goblin, Dr. Octopus, The Kingpin, and Mary Jane Watson. The bottom of the playfield features three flippers (one left, two right), while a fourth flipper sits in the middle-left of the table. While there isn't a goal beyond racking up a high score, the fast-paced gameplay and enticing art makes this a pleasure, though the generic sound effects are a minor disappointment.

This pinball was the first of Gottlieb's System 80 design; over 7,600 units of this pinball were made, and it became Gottlieb's best-selling game of 1980. Stan Lee owned one of the earliest production models and kept it in his office for over twenty years, until finally auctioning it off as part of his Stan Lee Collection in 2003. Many of the original tables are still operational today, a testament to the System 80 architecture, and it remains sought after by both pinball restoration hobbyists and collectors of comic book memorabilia.