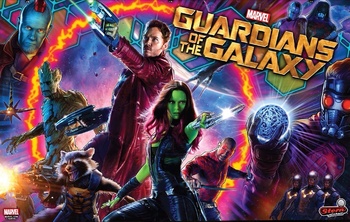 Guardians of the Galaxy is a 2017 Physical Pinball Table, designed by John Borg and released by Stern Pinball.

Unsurprisingly, it is primarily inspired by the 2014 film of the same name. The player must advance through the movie’s events, primarily by starting and completing modes themed after each of its primary characters. Along the way, they’ll have the opportunity to upgrade each regular mode to make it easier to finish, and may take advantage of Groot and Orb Multiball for big points. They’ll also be able to use a wide variety of Score Multipliers for further increases in scoring. Ultimately, the goal of the game is to start up one of the three Wizard Modes: Cherry Bomb Multiball, Immolation Initiative, and finally Save Xandar.

Other noteworthy features include a Groot head that can swallow the ball, a Rocket figurine that (on Premium and Limited Edition machines) recoils when hit, and Magna-Force (a magnet under the table that activates at certain times, similar to The Addams Family).