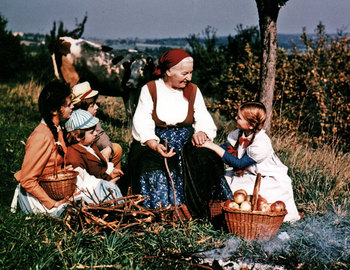 The grandma figure as is popularly presented. She does not try to hide her age or act hipper than she is. On the other hand, she is someone one can always rely on, even against one's parents, who will feed you her special recipes made with love, bring you presents on birthdays, and be a secondary parental figure.
Advertisement:

She enjoys baking and knitting, and has a fondness for cats. She probably wears a shawl or sweater that she knitted herself, and a long skirt or dress. Her hair is typically either permed and coiffed (similar to the hairstyles popular in her youth), or worn in a Prim and Proper Bun. (She will almost never be seen Letting Her Hair Down, or wearing it in a "pixie" style.) The stories she has to share from her youth will be real wisdom.

Of course, this does not mean that you should underestimate her. Dismiss her as washed-up and outdated and she will prove to you that a lifetime of experience can still beat the brashness of the young, and will not hesitate to give you a good whipping should you misbehave. Whether or not she can actually put up a fight varies. She may need saving, or is just as likely to unexpectedly bring out the big guns.

One does not need to be the main character's actual grandmother to fit this trope. Any elderly person who fits this image can count. Mrs. Claus is often portrayed this way.