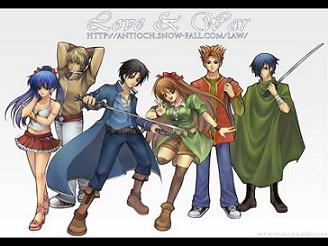 Love and War is set in the world of Terra, an Alternate Universe Earth which has been ravaged by war for centuries. The people of Terra have assembled into five nations, which are more or less constantly in conflict, until the Crown Prince of the Zion Empire, Lord Geraud Valtemond, convinces the countries to unite in the cause of peace. His ideals lead to the formation of the Commonwealth, a multinational body which - after some false starts - manages to keep the peace for over three hundred years.

Now, there are signs that things are starting to unravel. But all this seems rather far away for Ryan Eramond, a young man of eighteen who has just graduated from high school, and has the rest of his life in front of him...

After a mysterious opening, the story begins light-heartedly enough, with situations based on the joys and trials of adolescence. However, as the game progresses, we slowly begin to learn about political unrest in Terra, and by the end, our hero and his friends have all been touched by it.

Currently, Act I ("The Ties That Bind") of the story is complete, and its Updated Re-release can be downloaded here

of Act II, based upon Act I's original version, is also available. The author's site, including side projects based on the Love And War universe, can be found here.

Not to be confused with the TV series of the same name.

General tropes used in Act I of Love and War include:

Tropes used in the Part II demo of Love and War are listed below. Beware of spoilers!