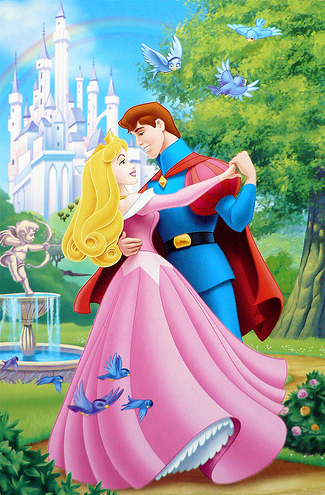 When we think of a Princess, the most common association is the archetypical princess, the perfectly good, innocent, and beautiful princess, who is practically a saint with a royal title. These are largely associated with Fairy Tales, and are considered to be as old as those types of stories.

Actually, this character started in the Victorian Era. In that time when stories were being shaped by Disneyfication and Bowdlerization, the concept of Courtly Love was warped to take all the sexual Sub Text out, and turn the noble lady into an ideal of the times. All to provide only the most positive and uncomplicated image to children, and even adults as well.

Princess Classic has many general traits.

These first three points are required:

The following traits are typical, though optional, and since Tropes Are Flexible, any of them can be mixed & matched.

Now changing values have eroded the idealism that this character represented. So even though this character has only slightly more credibility than the geocentric universe theory, she's not a Dead Horse Trope yet. She's still around in some fiction for really young children due to the Grandfather Clause. And even in everywhere else, there is still the belief that Everything's Better With Princesses.

Also, there is still the important fact that Tropes Are Tools and this trope doesn't mean a princess must lack Character Depth. She can still be well-rounded while having some of these traits.

These days, if she's played straight in a story, it's highly unlikely for that story to be taken seriously. Most writers would give her some flaws, some depth. She could be sheltered and demure, but not a Flat Character.

Also, being ground zero for any Princess Tropes, she can get an upgrade to Pretty Princess Powerhouse if the story requires her to (and can even overlap with Kicking Ass in All Her Finery). Likely to browbeat Silly Rabbit, Cynicism Is for Losers! into any cynic she finds.