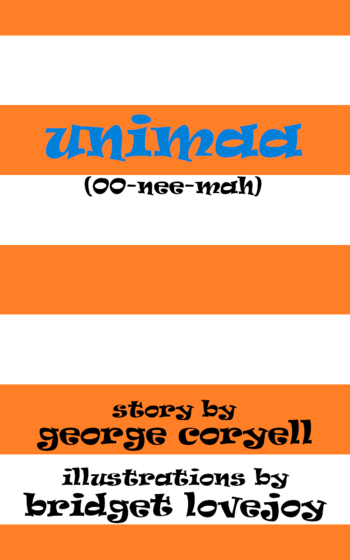 Unimaa (pronounced "OO-nee-mah") is a 2022 Amazon-published novelette (originally released as a Web Serial Novel in late 2021) by George Coryell (aka Icy Crow), author of Kasia, with illustrations in the full version done by Bridget Lovejoy.

The first chapter of the story revolves around one Eino Jokinen, a 12-year-old Farm Boy from the fictional country of Vasa (a stand-in for Finland) at the end of The Gay '90s, who finds his consciousness in the titular realm of Unimaa after being knocked out by a falling apple in his farm's orchard while doing chores his older brothers should have been doing. After he arrives there, he meets Princess Frida, a benevolent-looking spirit who recruits him to rule alongside her and help her find more "friends", then uses a black orb to take away his ability to wake up, which kills him a few days later in the real world. The rest of the story is set largely during one weekend around the very end of The '90s a hundred years after Eino's death and revolves largely around three siblings from Vasa: Lumi Laine, an eight-year-old girl, her seven-year-old brother Sami, and their four-year-old brother Mika, a friendless preschooler who feels unappreciated by his two older siblings and his parents. When Mika is asleep that Friday night after a misunderstanding over his siblings not wanting to play with him that afternoon, he finds himself in Unimaa and makes a deal with Frida to join her and Eino's society known as "Frida's Friends Club" at the cost of not being able to return home. When Lumi and Sami figure out what's going on, they become determined to find a way to bring back their brother from the subconscious and make up with him before it's too late.

, a Vanilla Edition print copy can be purchased here

, and a standard edition copy can be purchased here