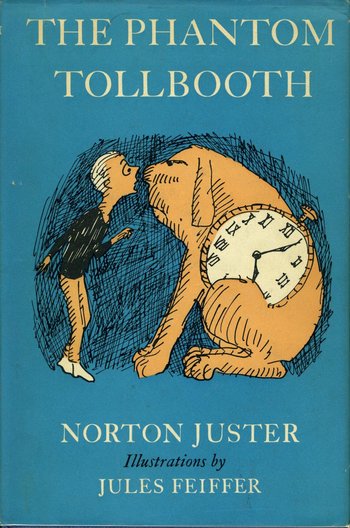 "There was once a boy named Milo who didn't know what to do with himself — not just sometimes, but always. When he was in school he longed to be out, and when he was out he longed to be in. On the way he thought about coming home, and coming home he thought about going. Wherever he was he wished he were somewhere else, and when he got there he wondered why he'd bothered. Nothing really interested him — least of all the things that should have."
Advertisement:

A classic 1961 children's novel by Norton Juster (and illustrated in most versions by Jules Feiffer) that has also become a favorite among adults for its intricate cleverness, rapid-fire wit and boundless imagination.

Milo is a bored little boy who is never happy, no matter where he is; he is especially unhappy in school, which (since no one has bothered to show him otherwise) he considers a giant waste of time. Then one day he comes home from school — he's a latch-key kid — and discovers a very singular box in his room. Within are the pieces to construct a toy tollbooth. Having nothing better to do, he follows the included instructions, drives through the tollbooth in his toy car, and suddenly finds himself driving down a road under a distant sky. Before long he's been swept up in a grand quest to save the great Kingdom of Wisdom by rescuing the Princesses of Sweet Rhyme and Pure Reason, who have been banished to the Castle in the Air and stand in dire need of rescue from the demons that live in the Mountains of Ignorance.

Along his surprising journey he meets such colourful characters as King Azaz the Unabridged, King of Dictionopolis, the realm of words; the Mathemagician, ruler of Digitopolis, home of everything number-related; Tock, the loyal (and literal) watch dog; the oversized Spelling Bee; the shifty-but-lovable Humbug; Faintly Macabre, the not-so-wicked Which; Chroma the Great, conductor of the sunrise; the Soundkeeper, who greedily keeps all sound to herself; and of course her great enemy, Kakofonous A. Dischord, Doctor of Dissonance, and his assistant the Awful Dynne.

A movie adaptation, an animated feature with a live-action framing device, was released in 1970, produced and co-directed by the legendary Chuck Jones, making him one of only two Looney Tunes directors to direct a feature that wasn't a merely a compilation of old cartoons (the other being Frank Tashlin). Juster went on record as disliking the film intensely, possibly because a lot of his incidental wordplay and allusion are streamlined out in favor of some catchy but extremely Seventies songs about finding your dreams by following your heart. Nevertheless, there's a lot to be said for Jones's typically cute and energetic character designs, and the film boasts an impressive voice cast including Mel Blanc, Daws Butler, June Foray, and Thurl Ravenscroft. Butch Patrick, of Eddie Munster fame, plays Milo.

In 2010 a new film version was announced to be in the early stages of pre-production, but work is proceeding slowly. As of 2016 a new scriptwriter