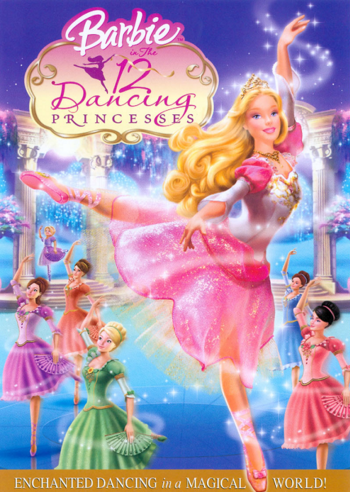 "There's a difference only you can make."note Left to right: Ashlyn, Lacey, Edeline, Delia, Genevieve, Courtney, Blair. Not pictured: Fallon, Hadley, Isla, Janessa, Kathleen
Barbie in the 12 Dancing Princesses is a 2006 Direct to Video movie from Mattel about the story of 12 unusual princesses, based loosely on The Brothers Grimm tale of the same name.
Advertisement:

Barbie stars in the movie as Princess Genevieve, the seventh of her kingdom's twelve princesses. She, her eleven alphabetically-named sisters (Ashlyn, Blair, Courtney, Delia, Edeline, Fallon, the twins Hadley and Isla, and then the triplets, Janessa, Kathleen and Lacey) and their father, King Randolph, live their lives as happily as possible after the death of the Queen. However, the free-spirited and cheerful girls are looked down at for their "ungraceful" behaviors, so Randolph summons his cousin, Duchess Rowena, as their chaperone. Rowena quickly seizes control of the court, bans the girls' beloved dancing and singing and, with her Number Two Desmond, begins to brew a plan where she will poison King Randolph to death, get rid of the princesses, and reign as Queen.

The princesses find comfort in their late mother's favorite story, which tells of a magical kingdom where golden flowers grant wishes and princesses can dance at an enchanted pavilion for three nights. The princesses realize that the story contains clues on how to enter the magical kingdom from their own bedroom, by dancing on specific stones on the floor. Now inside the magical kingdom, the princesses discover that the water there possesses healing properties, which gives them hope to help their father, whose health is starting to fail. Soon they're joined by the handsome Royal Cobbler Derek, who has a huge crush on Genevieve, and his parrot Félix; together, the group must put the pieces of Rowena's plan together and stop her.

Barbie in the Twelve Dancing Princesses shows examples of:

There’s a difference only you can make.
— Barbie
Feedback

Example of:
Faceplanting into Food