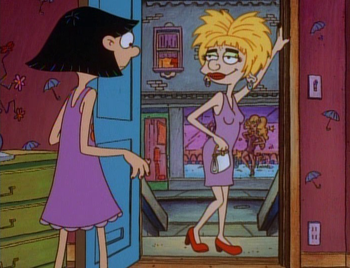 Nowadays, it's considered much more acceptable for a girl to be tomboyish than it was years ago. Still, sometimes, The Lad-ette will give femininity a try, even if it's just for one episode. Maybe she wants to look and act elegant for a special occasion, or she's aiming to fit in with her friends, or she wants her Love Interest to see her as more than just "One of the Boys". She may take it upon herself to learn ladylike behavior, or she'll have a feminine friend teach her to act prim and proper.

Either way, she'll suck at it.

If she takes cooking lessons, she'll end up burning water. Any attempts to apply makeup will leave her looking like a clown. Walking in high heels will result in her taking a tumble. Even after she learns polite manners, you can bet she'll swear/gobble her food/belch at the worst possible moment. Old habits die hard indeed.

This can lead up to An Aesop of the Be Yourself variety, that it's okay for a woman to be masculine if she's most comfortable doing so, and she shouldn't change herself to please others. Bonus points if the Aesop leads to a Tomboy with a Girly Streak.

This trope often shows up in Gender Bender fiction as well, where a male-to-female transformee will often attempt to awkwardly dress in as girly an outfit as possible with caked-on makeup while struggling to walk in heels rather than going for something more utilitarian. Often with no in-universe justification for doing so.

Different for Girls is a closely related trope that plays on the same gender conventions from another angle, when the pretty girl trying to perform the feminine tasks and having trouble with it is really a guy. Such a "girl" might also suffer another kind of femininity failure, resulting in an Unsettling Gender Reveal.

Super-Trope of Feminine Women Can Cook and Maternally Challenged. Contrast Girliness Upgrade and She Cleans Up Nicely, for when the attempt at being feminine works.