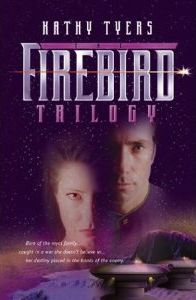 The Firebird Trilogy is a series of Space Opera novels by Kathy Tyers. Originally a duology released in the late '80s, in 2001 the series was rewritten to incorporate Christian themes and re-released, and a third book was added. In 2011, a fourth book came out, with a fifth and final book released in 2012.

Lady Firebird Angelo is a royal wasteling, born only to ensure that the royal line of Netaia does not die out and fated to commit honorable suicide now that her eldest sister has had two children. As a skilled military pilot, Firebird is ordered into the first wave of the attack against Veroh, a planet under Federate protection, under orders to seek honorable death in combat. Unfortunately for her plans, her mental cry of distress over the death of her wingman (and best friend) is noticed by the telepathic Special Operations officer, Brennen Caldwell, piquing his interest. He orders her captured.

While interrogating her via mind access, he realizes that they are perfectly connatural: their brains function in the exact same way, potentially enabling them to connect far more deeply than they could with anyone who was not connatural with them. Not wanting to lose the only person perfectly connatural with him, Brennen offers Firebird Federate asylum. Firebird is thus forced to choose between her desire to live and her proud loyalty to a country that demands her death.

Fusion Fire and Crown of Fire follow events immediately subsequent to Firebird, whereas Wind and Shadow focuses on the next generation, and Daystar the generation after that.

The series includes these books: