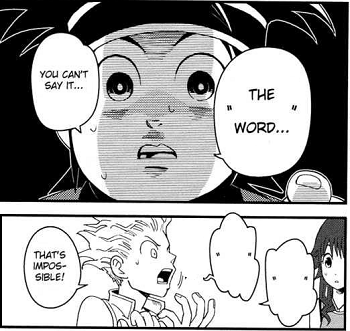 A Tongue-Tied character has some extremely important knowledge, and just Cannot Spit It Out... quite literally.

Sometimes a victim has to be kept quiet about what exactly has happened to him, or may have learned a secret that someone doesn't want shared. He can be threatened or encouraged to lie, but this is unreliable. Some villains attempt elaborate brainwashing or Laser-Guided Amnesia, but these options are all startlingly reversible. In light of this, the occasional magically-inclined villain will place a curse on his victim that also leaves the victim Tongue Tied.

He isn't silenced completely; the curse doesn't ordinarily prevent him from speaking or casting magic. The cursed individual just becomes unable to communicate a certain piece of information, like "I'm not really a frog, I'm a transformed prince!" or "I know where the villain's hideout is!" or "I'm under a curse!" If he tries to talk about this particular subject, he may be unable to speak at all, it may all come out as gibberish, or he may be magically forced to give a cover story in place of the truth he desperately wants to tell. In fact, this is often a secondary effect of a Forced Transformation curse, preventing the transformed character from getting help for his condition.

This "curse" is usually magical in nature, since the character will find himself unable to share the secret regardless of how badly he wants or needs to, but mental conditioning can be used to similar effect.

Sub-trope of Enslaved Tongue. Compare Keeping Secrets Sucks. Tongue Twister is the mundane equivalent. A Tongue-Tied character may occasionally function as The Speechless, and his problem is very similar to the character who Cannot Spit It Out.