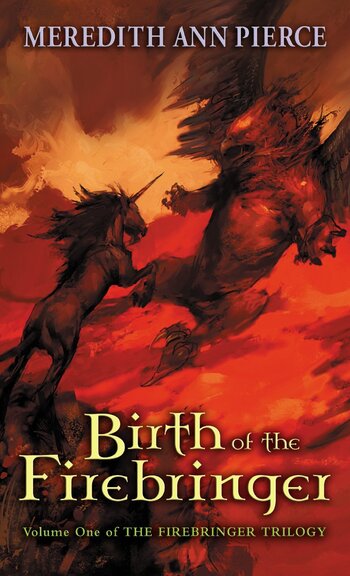 The Firebringer Trilogy by Meredith Ann Pierce is a Young Adult series of novels whose main protagonists are unicorns. The unicorns worship an omnipotent, omnipresent goddess called Alma, the Mother-of-all, and have lived in exile in the Vale of the Unicorns for four hundred years since they were driven from their homeland by the wyverns. They consider themselves at war with not just the wyverns but also the pans of the Pan Woods that surround the vale and the gryphons of the Gryphon Mountains, and have been awaiting the coming of the prophesied Firebringer who is destined to lead them back to the Hallow Hills and drive out the wyverns forever.

The first book follows the coming of age of Jan, the son of the unicorns' prince, on his initiation pilgrimage to the Hallow Hills to become a warrior. Accompanied by his best friend Dagg and their mentor Tek, Jan grows from a mischievous half-grown colt to a mature and confident adult, and after killing the wyvern queen in her den, is revealed to be the long awaited Firebringer. Upon his return to the Vale, Jan becomes his people's battleprince. The next two books follow Jan's attempts to discover the secret of fire, make peace with the pans and gryphons, and take back the Hallow Hills from the wyverns. Jan's own growth as a character is paralleled by that of the unicorns as a whole, who learn to put aside their assumptions and prejudices about the world around them.

The trilogy is well-written but not very well known outside a few small (but devoted) groups of fans. They were hard to locate outside the library after they went out of print in the late nineties, but Firebird began publishing them again in paperback in 2003.

Not related to the book Fire Bringer by David Clement-Davies.