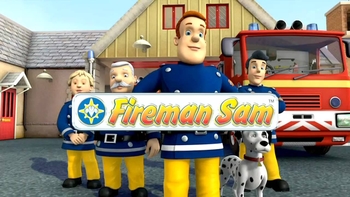 Sam is The Hero next door!Left to right: Penny Moris, Station Officer Steele, Fireman Sam, and Elvis Cridlington. The dog is Radar.
Advertisement:

Fireman Sam (Sam Tân in Welsh) is a 1987 toymation animation series, about the fire service in the fictional Welsh town of Pontypandy. The original series was first broadcast in the Welsh language, then in English as of 1988. Originally narrated by John Alderton. Said series ended by 1995. HiT Entertainment acquired the rights and produced a new series made with Claymation, lasting from 2005 to 2006. An ever newer CGI series debuted in 2008 and is currently broadcast on TV.

Series 8 introduces Gareth Griffith, Bronwyn's father and Sarah and James's grandfather who's a retired Newtown train driver who now operates the Pontypandy Express to and from the Pontypandy Mountains, mountaineer Moose Roberts, a Canadian expat who runs Pontypandy Mountain's Mountain Activity Center, and the kids' school teacher Mrs. Chen and her toddler daughter Lily. Series 9 brings in the Sparkes family, Mechanic and inventor Joe and his wife Lizzie, along with their wheelchair-bound daughter Hannah, coastguard Ben Hooper who is the head of the newly opened Ocean Rescue Center, and in the second movie special "Ultimate Heroes", Arnold McKinsley and Ellie Phillips, 2 newly graduated firefighters that are brought to Pontypandy by Chief Fire Officer Boyce (himself introduced in Series 6 as an old friend and superior to Steele) to help round out the firefighters' newly built Fire Station.

There are, apparently, two English dubs of this show, one meant for the UK and one for the US (the US version is actually dubbed in Canada with a Toronto voice cast), with the strange exception of Tom, Bella, and Moose who have the same voice actor in both dubs, since they're supposed to be foreigners (Australian, Italian, and Canadian, respectively). In addition, Station Officer Steele is addressed as Fire Captain Steele and Chief Fire Officer Boyce is referred to as Fire Department Chief Boyce instead. The biggest differences with the voices is the general lack of assorted "British" accents, and in a couple of cases, less "harsh" sounding characters, notably with Sarah, James, and Norman, though Gareth inverts the trend. The "in-house" vibe of it makes it come off as a bit different from an out-right re-dub, and it would explain Tom and Moose. Note that the US version is not very common, only appearing on the Fireman Sam US YouTube channel and the US Amazon Instant Videos. Beyond that, there's little evidence to suggest the dub even exists at all. Also, the US dub has only been made recently, as PBS Kids Sprout aired the series as late as 2014 with the UK dub.

Elvis and Mikeâs band break up

Elvis Cridington and Mike Flood have an argument on how they performed that they break up their band.

Elvis and Mikeâs band break up

Elvis Cridington and Mike Flood have an argument on how they performed that they break up their band.