Unto Us a Son and Daughter Are Born 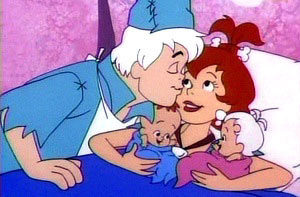 Color-coded for your convenience.
"You will be having both a boy and a girl."
— Dr. David Shaw, Life's Little Joy

Twin characters in a work of modern fiction come in all sorts (though they have a disproportionate tendency to be identical). However, when twins are born over the course of the story (as part of a Babies Ever After or otherwise), they are almost always male and female fraternal twins. Fraternal twins are more common in Real Life. (Identical twins are, of course, always the same gender; applying this trope to a pair of identical twins is usually a Critical Research Failure.Exceptions Turner Syndrome (only one X chromosome) can cause this with otherwise identical twins, and there is always the vanishingly small chance (the likelihood is somewhere in the ball park of 4.8 x 10^27 [that's about 1 in 5 octillion], given that each parent has about a (1 in 6.4 x 10^13 chance of creating an identical gamete [aka 1 in 64 trillion] that opposite sex fraternal twins will receive identical chromosomes with the exception of the sex chromosomes. Alternatively, one twin could identify as transgender, as is the case with Laverne Cox and her identical twin brother.)

Why does this happen? The birth of a boy and a girl instantly creates a fully formed family of father, mother, son, and daughter, putting all of the family relationship tropes into play, without any perceived bias by making the boy or girl older and in an authority position over the other. These twins are frequently the first and only children of their parents. Compared to other twins in fiction, it's more rare for these twin pairs to include an Evil Twin or be Separated at Birth. While they are occasionally Half-Identical Twins, more frequently one resembles the mother and the other the father. Bonus points if one of the parents is also a twin, bringing it full circle.

This trope is less prominent in mythology due to the blurred lines between story and backstory. In ancient myths or works like the The Silmarillion that are deliberately mythological, the birth of twin brothers is much more common. The birth of twin sisters is generally rare in all media.

Especially common for firstborn twins in a small Nuclear Family. If twins are born into a large family that already has more than one child of the other gender, this trope is more likely to be averted. When this trope is averted for other reasons it's a very bad sign, as one or both of the resulting children will usually be supernatural or evil. Mythological aversions tend to have different fathers or be destined to depose or kill each other. Aversions are usually still fraternal, though. It's rare to see infant identical twins in fiction, as they tend to appear fully formed at ages six to thirty.

A frequent trope in Soap Opera, although due to the sheer volume of twins in decades-long soaps this is also occasionally averted.

Frequently combined with Spin-Offspring. Contrast Separated at Birth, which is a backstory trope for older twin characters.