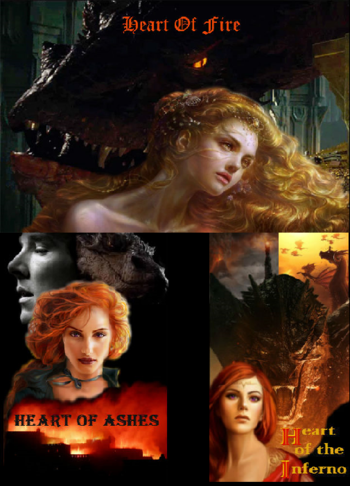 . The trilogy features an Original Character, a Seer named Kathryn, and her gradually developing relationship with the dragon Smaug. The first two parts are completed, and the third part is ongoing.

The first part of the series, Heart of Fire

, begins with Gandalf meeting Kathryn, a Seer who lives in hiding and has an amazing story to tell. Many years earlier, the ostracized seer wandered Middle-Earth in search of peace, but when she settled in the ruined city of Dale, her life was changed forever. Upon hearing her heavenly singing voice, Smaug decided to keep Kathryn as a part of his hoard. From there began Kathryn's game of survival that led her to be connected with the dragon forever… to the point that she decides to return to him when Thorin Oakenshield's Company sets out to reconquer the Lonely Mountain.

Official description of Heart of Fire: "I am SMAUG! I kill where I wish and none dare resist! And now, you belong to me!" Smaug stirs beneath Erebor when he hears a heavenly voice and knows he must have such a prize for his own. Trapped in the Dragon's lair, Kathryn, a seer, must survive this deadly creature to escape to freedom. But a vision plagues her, one that connects her to the mighty dragon forever.

In the second part of the series, Heart of Ashes

, Smaug returns from the dead, transformed into a man. Determined and wrathful, he sets out to find a way to regain his true form, exact his revenge on the people of Dale and the dwarves of Erebor, and reunite with Kathryn who's been taken to the city Vathvael. Dark forces hunt the dragon and the Seer, and with no one to trust, Kathryn is having continuous visions of a darkness that calls to her… and an evil that now grows inside of Smaug. Click here

to see the trailer.

Official description of Heart of Ashes: "I now have a duty that you abandoned me to face. It is time for you to face the ashes of your fires, dragon…" Smaug has been resurrected into the form of a human man, and now, he will stop at nothing to reclaim his lost form, exact his revenge on those that killed him and possess the one woman who stole his heart. The world will burn before him and darkness will feed his rage.

The third part of the series, Heart of the Inferno

, takes place during the War of the Ring. Smaug and Kathryn who have lived a secluded life for sixty years, are called by Gandalf to aid the Free Peoples against Sauron and his minions. Click here

to see the trailer.

Official description of Heart of the Inferno: "The third age is now at an end, and in its place I shall bring the wings and fires to herald a new era: the Age of Dragons!" Gandalf seeks the help of an unlikely ally to fight the evil of Sauron: Smaug. With Kathryn, a Seer, he shall go on a journey that will determine the fate of Middle-Earth forever. The fires have ignited, the ashes have scattered, but the inferno still rages.

Now with a Character Sheet that Needs Wiki Magic Love.