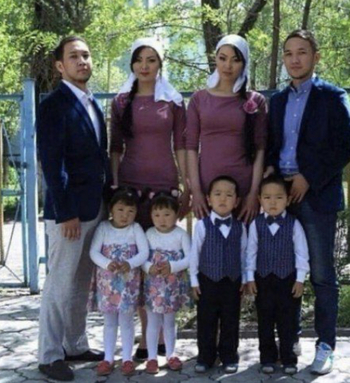 "Multiples ran in her family. Felice was one of a set of twins, and not one of her sisters had ever given birth to less than twins. Her family history held that it had something to do with a blessing placed on them, but by what—well, there were several versions."
— Out of the Deep
Advertisement:

There are long-running beliefs that twinhood is hereditary and twins skip a generation, and these beliefs bleed into fiction. A family that has a previously-introduced set of twins (or triplets, or so on) can expect to have at least one more set waiting in the wings—even when this is nearly impossible according to real-life genetics.

The presence of established twin relatives, identical or fraternal, can often set up the birth of more twins or a long-lost twin showing up. If one of the parents is a twin, having twin children is often used to bring their story full circle (especially if the children are a male/female pair). Often, the newer or younger set of twins parallels the older one in some way: they bear strong similarities to the previous set that can extend to personality and behavior, take different life paths, or have an entirely different sibling relationship. In other words, the twin children are used as not so subtle Foils or Mirror Characters to the parents.

"Twins run in the family" will be used to explain all sorts of improbable twinning, such as a family having both fraternal and identical twins or multiple sets of identical twins, male fraternal twins going on to father twins, or sets of twins many generations removed from each other. A fictional species may even go as far as having a majority of births be multiples as a type of Bizarre Alien Reproduction.

In real life, there is no scientific proof that twins skip a generation, and as far as scientists know, identical twins are a spontaneous, random occurrence that doesn't run in families. Fraternal twins can run in the family, but only through the mother: some women are genetically predisposed to hyperovulationnote Fraternal twins are caused by two separate eggs being fertilized by two separate sperm, while identical twins are caused by a previously-fertilized ovum splitting in half. Men always release multiple sperm, but women most often ovulate one egg each month. If a woman has a hereditary predisposition to ovulate more than one egg at a time, her chances of having fraternal twins will be higher, whereas the father's DNA obviously won't affect how many ripened eggs his partner has available for his sperm to fertilize. Artificial insemination and a previous birth can also increase the chances of a multiple birth. Fiction, however, will often treat identical twins and fraternal twins similarly.