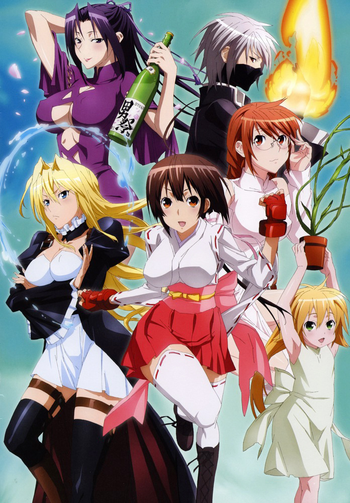 Boobies for the win!
Advertisement:

Minato Sahashi is an Ordinary College Student, even though he's failed his entrance exams twice. As he's walking down the street, he suddenly finds a Magical Girlfriend falling from the sky and crashing into him. She is Musubi, one of 108 beings known as Sekirei, about to be engaged in a Battle Royale across Tokyo, headed by the mysterious MBI organization. With a kiss, Minato "wings" Musubi and becomes her Ashikabi, or master, for the battle royale. The Sekirei Plan begins.

A sequel manga series called Sekirei - 365 Days Without a Girlfriend started up in the fall 2017 season. Once again being done by Sakurako Gokurakuin.

The series was adapted into two 12-Episode Anime seasons for the summers of 2008 and 2010. The first season was titled Sekirei while the second season was known as Sekirei ~Pure Engagement~.

The anime was licensed by Funimation. Find it here.