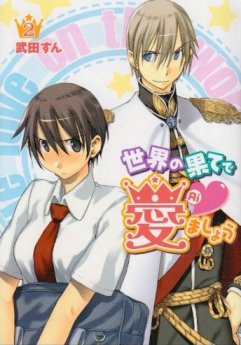 Sekainohate de Aimashou (世界の果てで愛ましょう; "Let's Love at the Ends of the World") is a 2008 manga by Takeda Sun.

Yano Ryouma is an average Japanese Schoolboy, but he's a pushover: so easygoing and unassertive that his classmates take advantage of his good nature by dumping all the boring work of preparing for the school festival on him. When half the school is destroyed in a freak incident caused by alien Prince Emilio's Cool Gate malfunctioning Ryouma finds the Prince pinned in the debris. Unable to rescue the trapped Prince, Ryouma nevertheless sacrifices himself to protect Emilio during the subsequent landslide caused by his efforts. Admiring Ryouma's spirit, Emilio slips the unconscious boy a potion that turns him into a girl, and thus the consort of the heir of a Magitek filled space empire resembling a Medieval European Fantasy. Hilarity ensues as Prince Emilio repeatedly attempts to court Ryouma while the latter tries to convince Emilio to turn him back into a boy.