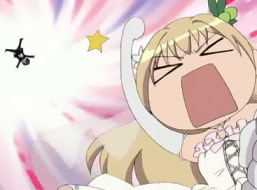 Taaaaaake THAT!
"Guaranteed to make your enemy A Twinkle in the Sky"
— "Megaton Punch" weapon description, Disgaea
Advertisement:

A punch so strong it doesn't just send its target across the room; it sends them across town, or to another state, or even another country. Sometimes reaching Low Earth Orbit and vanishing as A Twinkle in the Sky, or in extreme cases, right into the Sun.

This is usually an adaptation of a one-panel gag the animators end up having fun with, although the usual treatment is to make it so over the top that it's not mistaken for real violence. On the other hand, it may be played straight if the attacker is just that strong.

When it's Pervert Revenge Mode, compare Armor-Piercing Slap, which this trope is often combined with, or Hyperspace Mallet for another option an angry anime girl might try. If they're using a weapon of some sort, they may be a Home Run Hitter instead. Not to be confused with Rocket Punch, although it's only a matter of time before the two are combined. May cause a Nose Bleed if hit in the face, or if the character is being punched for seeing his attacker naked. If the victim is, in fact, completely and utterly innocent of such things and nothing naughty happened then it's an Unprovoked Pervert Payback.

Punched Across the Room is a more low-key, 'serious' version of this trope. See Power Fist for another way to punch somebody really hard.