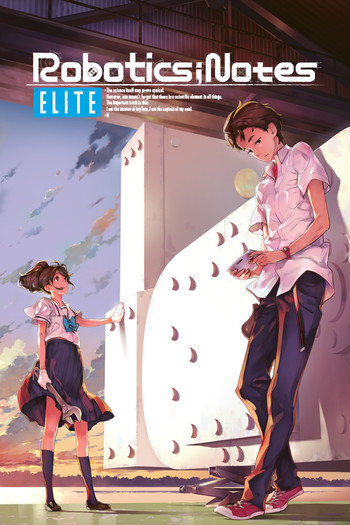 Justice Always Prevails.
"The science itself may prove cynical. However, one mustn’t forget that there is a scientific element in all things. The important truth is this: I am the master of my fate, I am the captain of my soul."
Advertisement:

The year is 2019. The setting is Tanegashima high school.

Robotics;Notes follows Kaito Yashio, an avid fan of Fighting Games who is ranked fifth worldwide in the popular fighting game known as Kill-Ballad. Along with Akiho Senomiya, he is a member of his school's Robotics Club. The club's purpose is to complete a working copy of the Humongous Mecha Gunvarrel, the titular character of a wildly popular Show Within a Show anime, started by Akiho's sister, Misaki. However, keeping the robotics club afloat is not easy. Kaito and Akiho are the only members and Akiho makes extraordinary budget demands to the school. Thus, the vice-principal offers them a condition: they must win the Robo-One tournament to obtain the desired budget.

Amidst their efforts to create a working Humongous Mecha for an upcoming expo, Kaito comes across Subaru Hidaka, a younger high school student who has his own fascination in mecha; Frau Koujiro, the Hikikomori genius programmer of Kill Ballad; Junna Daitoku, the granddaughter of the local robotic parts shop who's ironically nervous around robots; Nae Tennouji the young engineer of JAXA who provides funds for the club; and a human-like AI named Airi, who leads him to the mysterious Kimijima Reports that detail how and why a world-altering disaster may be on its way...

The Sequel to Steins;Gate and third entry in the Science Adventure Series, the game was released on the PS3 and Xbox 360 in 2012. In typical visual novel fashion, the story features branching paths and Multiple Endings depending on the player's choices. Steins;Gate's Phone Trigger system is replaced by the Phonedroid Trigger, which activates Kaito's tablet computer, allowing the player to utilize its applications.

Unlike previous Science Adventure entries which were stand alone stories, Robotics;Notes is very much a "culmination title", where there are MANY direct connections between its story and Chaos;Head + Steins;Gate. Several characters return both in the main story and otherwise (they are name dropped/sometimes talked to in Twipo if the latter), the science and several very important plot points from Chaos;Head are crucial to understanding the conspiracy behind Robotics;Notes, there are oodles of references to the events and key phrases that are heavily referenced from previous entries, and this game very much advances the overarching plot of the battle against the Committee of 300 that the entire series follows. This game should ideally be played only after the previous two Science Adventures, especially Chaos;Head in particular, or else you will likely be very lost on the late game story and fail to understand what is going on as you lack the proper context, and several plot points will feel like they come out of nowhere and are Deus Ex Machinas when in reality they are not.

An animated adaptation by Production I.G began airing on Fuji Tv's noitaminA slot on October 2012, which can be seen on Funimation. Five manga have also been produced.

Frau Koujiro also appears in Phantom Breaker: Battle Grounds, a spin-off Beat 'em Up to the Fighting Game Phantom Breaker as the second special guest character via DLC, (The first one being Kurisu).

Chaos;Child, the mainline entry follow up to Robotics;Notes and thematic sequel to Chaos;Head, was released on the Xbox One in December 2014.

Meanwhile, a direct sequel to this entry, Robotics;Notes DaSH was announced in mid-2017 with Hashida Itaru/DaSH as the protagonist. It was released for the PlayStation 4 and Nintendo Switch on February 2019.

Spike Chunsoft announced in July 2019 that both titles will get an official release in the west for PlayStation 4, Switch and Steam around 2020.