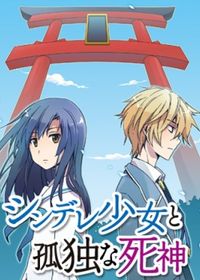 Wakanae Akira wakes up to a normal day on her boring island home, only to learn that a new student is going to be transferring to her class. Much to everyone at her middle school's disappointment, the new kid, Nishigami Matsushirou, turns out to be an incredibly concentrated ball of pure angst. He introduces himself as a shinigami and tells the class that everyone who gets close to him dies.

Nishigami proceeds to alienate his classmates to the best of his ability, but ends up class president alongside Wakanae to their mutual displeasure. However, as they interact, they begin to develop feelings for one another...

Shindere Shoujo to Kodoku na Shinigami (The Dyingnote ('Shindere' is one of the -dere forms composed of 'death' and 'sweet', which doesn't exactly lend itself to a proper English translation.) Girl and the Forlorn Death God) builds off of a generic premise to become anything but, as Wakanae and Nishigami weave their way through dubious traditions, xenophobic natives, and desperate foreigners in search of the truth behind the island's greatest secret.

At the end of March 2013, Gangan Online announced that the manga had been put on indefinite hiatus due to the author, Yuki Shinkiba, coming down with a sudden illness. On September 24, 2015, she was reported to have died three months earlier, on June 17.