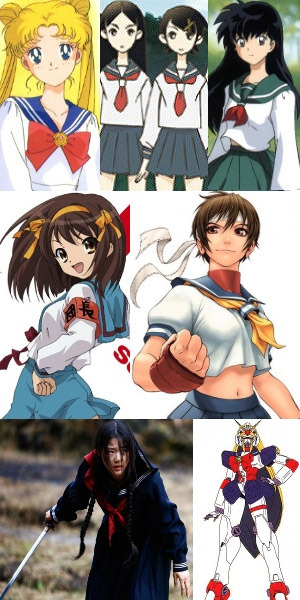 Everyone looks good in a Sailor Fuku. Even mechas.note From top left then down: Usagi Tsukino, Chiri Kitsu (L) and Kafuka Fuura (R), Kagome Higurashi, Haruhi Suzumiya, Sakura Kasugano, Saya, Nobel Gundam
"Take it! I'm supposed to be the one who laughs last
Because of my sailor uniform, that's the conclusion
I'm in a bad mood, what to do?
Even though it's Monday! Summer clothes'll fix it — Cuuute!"
— Lucky Star opening theme (okay, it sounds better in Japanese, but...)
Advertisement:

◊ (themselves based on European naval uniforms), but the prevalence of sailor-suited school girls in anime, manga, and other forms of Japanese media show how iconic the sailor fuku is in Japan. This is true despite many Japanese schools having switched to uniforms like those of today's Western private schools. However, there are some American schools that use sailor fuku.

Sailor-suit uniforms may be a vehicle for Fanservice as well, as the uniform skirts are often depicted as being dangerously short. This alteration, while it may be off-putting to those who are not used to anime or manga-based media, is so common that it is rarely commented on or questioned, and it has become Truth in Television to some degree.note In Real Life, the skirt's mandatory length often varies a lot depending on the school, the prefecture and the particular student's preference. Even whenever the skirt is long, many modern students choose to wear it shortened above the knee for fashion, allure or comfort, either by folding it over the waistband or by using a belt underneath so they can also wear it the official way in formal occasions. This custom, which originated early into The '90s, has been influenced by anime aesthetics and vice versa. Ironically, in the '70s and late '80s, the common image of a sukeban or female delinquent had an extremely long skirt, but this appears less frequently these days.

Uniforms may be altered in other ways to distinguish certain characters, especially ones considered particularly beautiful. The aforementioned Japanese delinquents also showcase a number of modifications, which was sometimes cited as a factor to shift away altogether from sailor-style uniforms among senior high school students.

This is more a Japanese cultural trope than an Anime Trope but is found prominently in anime, especially on Joshikousei; compare the Western trope Catholic School Girls Rule.

It may depend on the region, but in Real Life the sailor suit (and the traditional male counterpart, the gakuran — a black ensemble with a high collar, based on Prussian officer uniforms) has become largely the domain of middle/junior high schools, whereas high schools have shifted towards more fashionable or professional-looking styles of uniform, often with tailored blazers, vests, neckties, and plaid skirts. Elementary schools, if they have a uniform, tend towards collarless jackets and skirts with suspenders — and sometimes, students wear their gym uniforms during class and change into their formal uniforms when outside of the school or attending ceremonies.

See School Sport Uniform and School Swimsuit for other types of Japanese uniforms often used to a similar effect in media.

Compare School Uniforms Are the New Black, since some examples here have the uniform as their standard outfit.