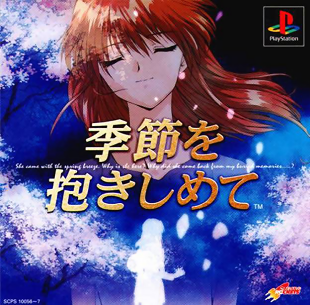 She came with the spring breeze. Why is she here? Why did she come back from my buried memories.....?
Advertisement:

Kisetsu o Dakishimete (季節を抱きしめて, lit.: "Embracing the Season"; translated as "In the Season of the Cherry Blossoms" in the game's instruction booklet) is the second entry in the interactive anime Visual Novel series Yarudora, produced by Sony Computer Entertainment, and developped by Sugar&Rockets and Production I.G. The game was initially released in 1998 on Playstation 1, then re-released in 2005 on Playstation Portable and in 2009 on the Playstation Store.

Spring, in a little Japanese town. The main protagonist (i.e. the character controlled by the player), a 20-years old man, enters university and is greeted by his close friend Tomoko Kunitachi. He actually was a Rōnin for a year, due to a Heroic BSoD caused by the loss of the classmate he loved in his High School time, Mayu Sakurai. It was made worse by the fact he feels guilty for this, as he lost the courage to confess his feelings to her during their last conversation, and she died in a traffic accident mere hours later. Tomoko, whom he met at cramschool, and who fell deeply in love with him, helped him get back on his feet, and he's now partially back.

But as he and Tomoko are walking in the blossoming cherry trees-filled university's park, the main protagonist notice an unconscious girl under the "Hirenzakura" (="Cherry Tree of the Tragic Love"), a tree famous in the town for its centuries-long legend of a tragic love having occured at its feet, and as such is said that couples meeting there are fated to be separated.

As the protagonist rescues the girl, he has a shock: she bears an uncanny resemblance to his former love Mayu. When the girl wakes up, she says she has lost her memories. Seeing the plight of the girl, and troubled by her appearance that awakes in him wounds not quite healed, he joins her in her Quest for Identity. She'll decide to call herself Mayu, to the surprise of the protagonist.

And thus starts a Slice of Life Love Triangle story (as Tomoko, who openly claims her love for the protagonist and unilaterally considers him as her boyfriend, isn't pleased at all at his interest towards Mayu), in which the fantastic will invite itself in, as the secret behind Mayu's identity will unfold...

The "Spring" title of the four original Playstation 1 Yarudora games, Kisetsu o Dakishimete was directed by Mizuho Nishikubo (Ghost in the Shell, The Mysterious Cities of Gold, Patlabor 2 The Movie), and the character design is courtesy of Kaori Higuchi (Neon Genesis Evangelion, Angel Sanctuary OVA).

BEWARE, this game is very story-driven. DO NOT HIGHLIGHT THE MARKED SPOILERS BELOW if you want to keep the full experience of the game. You Have Been Warned.

This game presents the following tropes: