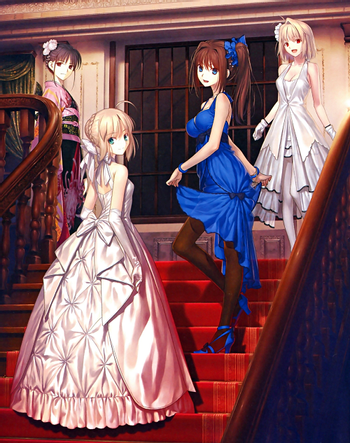 Piece by piece, snip by snip
Croup, dock, haunch, shoulders, hip
Thread by thread, primmed and pressed
Yard by yard, never stressed
And that's the art of the dress!
— Rarity, My Little Pony: Friendship Is Magic, "Suited for Success"
Advertisement:

And it's considered one of the most prominent ways to tell men from women, with signs and symbols using a dress or skirt to tell that an abstract figure is male or female. It's also a major reason the trope Real Women Don't Wear Dresses has that name.

Also are more likely to be Doomed New Clothes than other kinds of garments.

These tropes will likely fall into Rule of Glamorous or Rule of Sexy.