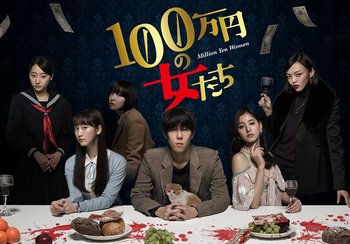 Million Yen Women (Japanese title 100万円の女たち; 1,000,000 yen no Onnatachi) is a Japanese drama/mystery series produced by TV Tokyo and Netflix. It's based on a manga series of the same name.

Shin Michima (Yojiro Noda of RADWIMPS fame) is a writer struggling to finish his current novel. For the past six months, he has been renting his house to five women:

Total strangers to each other, they were invited by mail by some person supposedly unknown to all of them to come live with Shin in exchange for a monthly rent of 1,000,000 yen. They live under four rules:

As Shin struggles to cope with recent tragedies in his own life, and as the women and his publicist Seiji Sakurai try to help him in their own ways, a series of events begins to unfold that will change their life together forever.
Advertisement: