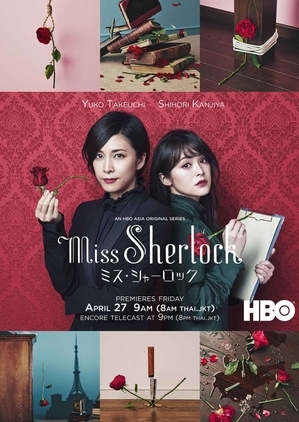 Surgeon Wato Tachibana returns to Japan from a volunteer doctors' mission in Syria to recover from her experiences. Almost immediately upon her arrival, her mentor is killed from an explosive device that somehow appeared in his stomach. She finds herself requiring the aid of Sara "Sherlock" Futaba, a consulting detective for the police who solves particularly bizarre cases. Without any other homes at her disposal, Wato and Sherlock are forced to room with each other and quickly become embroiled in each other's lives, while fighting crime and taking down the agents of the mysterious Stella Maris, a Diabolical Mastermind with a sinister agenda.

While not particularly grounded or serious in its depiction of the Holmes story, the show nonetheless uses its premise to focus on Wato and Sherlock's growing friendship.

The first season has eight episodes in total. It’s doubtful whether the series would continue, given Yuko Takeuchi (Sherlock)’s death in September 2020.

See Sherlock Untold Stories, another adaptation of Sherlock Holmes which aired in Japan in Fall 2019 under Fuji Television with 11 episodes.