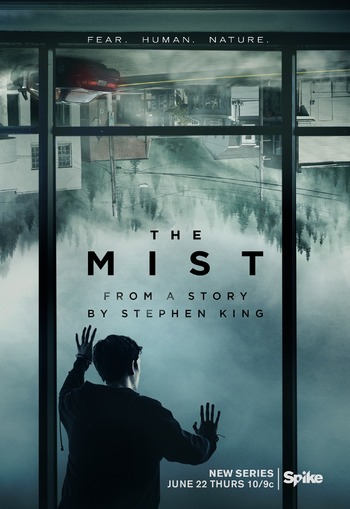 What's outside there could be the least of their problems...
Advertisement:

The Mist is an American science fiction-horror thriller television series developed by Christian Torpe for Spike, released in 2017. It is based on the horror novella of the same name by author Stephen King.

An unexplained mist slowly envelops the city of Bridgeville, Maine, creating an almost impenetrable barrier to visibility. The residents of the town soon learn the situation is even more precarious as hidden within the mist are numerous monsters of various sizes that attack and kill anything that moves.

Unlike other versions where the mist is as indifferent as a natural distaster, this one shows signs of being a Genius Loci.

The series was canceled after the completion of its first and only season.

The work contains examples of the following tropes.