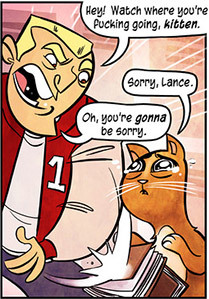 "In 80s teen movies, if a character is sporting a letter jacket, it might as well be the letter swastika, because he is going to be committing crimes against humanity."
— Cracked, "5 Horrible Life Lessons Learned from Teen Movies

See that tall, hunky and vulgar blond guy in the football letterman jacket picking on the nerd over there? What's his name, Dick? Bill? Kyle? Tyler? One of those? That's him. One in every school.

The Spear Counterpart to the Alpha Bitch (and sometimes The Cheerleader), the Jerk Jock is the Chief Bully who dominates the school/college environment through physical violence and threats of brutal retaliation. A boorish, obnoxious, spiteful asshole with an out-of-control sense of entitlement, he spends his time beating people up, getting drunk and destroying property; and in darker works, he may also be an incorrigible rapist.

Of course, most of that doesn’t matter to the student body. Often times, the Jerk Jock is the reigning king of the campus, with many people wanting to be his friend or his date, or at least be on his good side. His bullying ways don’t make him a pariah, but a prince, because as everyone in High School knows, anyone who’s popular is a bully.

Just as the Alpha Bitch has a Girl Posse, the Jerk Jock has the Cool Crowd, a crowd of hangers-on who bow to his every whim and help him victimize whomever he decides to pick on. And he inevitably decides that Our Heroes are his favorite targets.

Like the Alpha Bitch, the Jerk Jock is surprisingly popular despite his repellent personality, especially with the school's staff and most adults, and can get away with most anything. Chances are he's extremely necessary for a high school/college to compete against rivals lest they be wiped out into obscurity. Or, in the similar vein to the Alpha Bitch: politics and cold hard cash.

However, where the Alpha Bitch uses her wiles and sex-appeal to get what she wants, the Jerk Jock usually isn't very smart and is more likely to fall back on fear of violent reprisal instead. Usually, violence is not an option to deal with him, unless The Hero or somebody on their side (likely The Big Guy) is indeed physically stronger than him. Other than that, manipulating him to his doom often proves to be the most effective way to deal with him, since he's seldom bright enough to see through intrigues; the fear of public humiliation, loss of status, or his parents discovering his ways is often sufficient to keep him at bay. That or a Jerkass Realization.

In shows focusing entirely on school life, he'll be a primary antagonist; however, if the school environment is merely a setting and not the key focus he's more likely to be just a recurring nuisance for the characters to deal with, or a Villain of the Week. In shows dealing with the fantastic, he can often be found Mugging the Monster, or portrayed as stupid enough to bully someone even if he knows that they have powers that could reduce him to a smear on the wall. In a Slasher Movie, chances are very, very good that he is going to die, winding up an Asshole Victim.

Whilst it's not as common to get a sympathetic side to the Jerk Jock as with the Alpha Bitch, you'll sometimes get a softer version who isn't evil so much as an arrogant, self-absorbed Jerk with a Heart of Gold who doesn't really know any better. This version is much more likely to end up petting the dog, and may reveal his sensitive side in an Enemy Mine. He may also mend his ways and join the hero's side. And even while still a villain, the Jerk Jock can garner sympathy if he's given a Freudian Excuse (with having a "Well Done, Son!" Guy as a father or an outright abusive family being the most common).

Unfortunately, this trope tends to be somewhat a Truth in Television, and very much prevalent in team sports. The reason is diffusion of responsibility

: team sports encourage tribal mentality, loyalty to one’s own tribe (team), hostility to other tribes (other teams), and complete indifference towards outsiders. The tribal mentality dilutes the responsibility of one's behavior and manners, and even at some instances encourages uppity and obnoxious behavior. Schools that have particular reputations for a specific sports program may even grant special privilages to star players (and sometimes even cover up bad behavior to prevent the team's reputation from suffering). Rarely do practitioners of individual sports fall into such a category, and are more often a Badass Bookworm or Genius Bruiser type. Jerk Jock behavior is seriously discouraged in Real Life martial arts, on pain of outright expulsion from the sport, let alone the violator's school.

See Schoolyard Bully All Grown Up and Kids Are Cruel. Compare to, and sometimes may even overlap with, Big Man on Campus, who usually matches the Jerk Jock in popularity, but is less of an antagonistic force. Also compare Dumb Jock. Little relation to Violent Glaswegian.

Note if a character is a bully, but isn't depicted as a Sports player or a rich boy with Good publicity, then they're probably just a Barbaric Bully. However if thuggish, and Obviously Evil enough, some Jerk Jock characters can qualify as a Barbaric Bully as well.

Care Bears doesn't normally show the kids as villains, but when they do...

Care Bears doesn't normally show the kids as villains, but when they do...