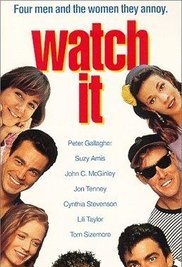 You know what they say; "Vaya con dios, senor." That's Spanish for "Watch it, pal."
Advertisement:

Danny, who owns a garage/car lot, Michael, a lawyer, and Rick, a salesman, all live together in a house in The Windy City. They all like to play practical jokes on each other, and one of them will usually say "Watch it!" when the joke is played. Into this situation comes John, Michael's somewhat estranged cousin, and a drifter. At a party Michael takes John to, John sees Anne, Michael's on-again, off-again girlfriend (Michael seems like he's the Ur-Example of I'm a Man; I Can't Help It, but in reality, he has a Freudian Excuse; see below); Anne catches Michael cheating and leaves the party, so John, who's attracted to her, follows her, and they strike up a friendship that leads to a relationship. However, John can't really commit and Cannot Spit It Out, so Michael moves in, apologizes to Anne, and they get engaged. But does he mean it? And does she still have feelings for John?

There's also the plot of the practical jokes, as well as a subplot about Rick getting into a relationship with Ellen, a schoolteacher.