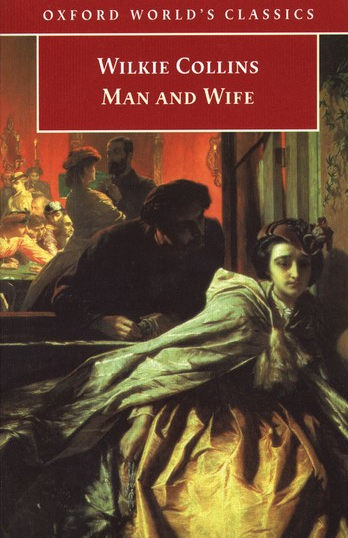 Man and Wife is an 1870 novel by Wilkie Collins, aimed at highlighting injustices in the marriage law of the time.
Advertisement:

Anne Silvester is Blanche Lundie's governess, and her closest friend. But following an affair with the celebrated amateur sportsman Geoffrey Delamayn, she realises she'll be Defiled Forever unless she can get him to marry her. Since they're in Scotland, it'll be sufficient if they stay at a hotel together and address each other as husband and wife in front of the staff. At the last minute, Geoffrey is called away, and he sends his friend Arnold Brinkworth, Blanche's fiancé, to tell Anne what's happened. In order to keep up appearances, Arnold poses as Anne's husband for the night. Which means that in the eyes of the law, he might — or might not — now be married to Anne.

Since Geoffrey would much rather marry a rich woman than the penniless Anne, it's obviously very much in his interest that Anne should legally be Arnold's wife. But how far will he go to bring that about?