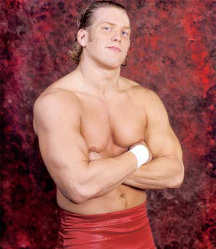 Christopher Nowinski (b. September 24, 1978) is a retired American Professional Wrestler known for his brief run in WWE and, subsequently for forming the Sports Legacy Foundation to deal with issues related to concussions. He was a WWE Tough Enough graduate and debuted in 2002. As a wrestler, he was a 2x WWE Hardcore Champion