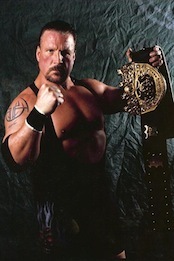 Scott Norton (born June 15, 1961) is an American Professional Wrestler from Minneapolis, Minnesota who is best known for his tenures in WCW and New Japan Pro-Wrestling. Initially a skilled professional arm wrestler (said skills earned him a role in Over the Top), Norton was approached by New Japan about becoming a professional wrestler. While he turned down the offer initially, he eventually decided to become a wrestler. Beginning his training with Brad Rheingans, Norton debuted in Verne Gagne's American Wrestling Association in 1989. During his stint in AWA as well as the NWA territory, Pacific Northwest Wrestling he wrestled as one of the Yukon Lumberjacks (with John Nord) and Scott "Flapjack" Norton respectively as a wrestling lumberjack. As himself he won the Pacific Northwest Heavyweight Title

from Brian Adams, but was stripped of the title two weeks later after attacking several wrestlers.

In 1990, Norton chose to go to New Japan where he worked primarily as a tag team wrestler. He acted as a replacement for an injured Scott Steiner defending his IWGP Tag Team Title

with Rick Steiner. Afterwards, Norton would go on to become a two time Tag Team Champion, once with Tony Halme (ironically defeating the Steiner Brothers) and once with Hercules Hernandez as the Jurassic Powers.

In 1993, Norton jumped to WCW where he had a brief feud with Sting before forming a tag team with Ice Train (aka M.I. Smooth) to form the team Fire and Ice (Norton was Fire). After they split up, Norton would begin to work in both NJPW and WCW where he and Shinya Hashimoto won New Japan's Super Grade Tag League in 1996. Later that year, he would join the New World Order and form the tag team, Vicious and Delicious with Buff Bagwell in WCW.

As the nWo's influence would spread to NJPW, nWo Japan was formed in December 1996 with Norton and Bagwell joining them a month later. As time went on however, Norton's experiences in WCW and NJPW would shift further apart from each other. In WCW, the nWo would first split off and then reform with more members than before. Nortan would become a member of the nWo B-Team. In NJPW, he was a dominant force for nWo Japan, winning the IWGP Heavyweight Title

In 1999, Norton leaves WCW for good, working exclusively with New Japan. He becomes a member of Masahiro Chono's Team 2000 stable once again becoming the IWGP Heavyweight champion. In 2006, Norton would leave NJPW, he now is semi-retired and only wrestles occasionally.