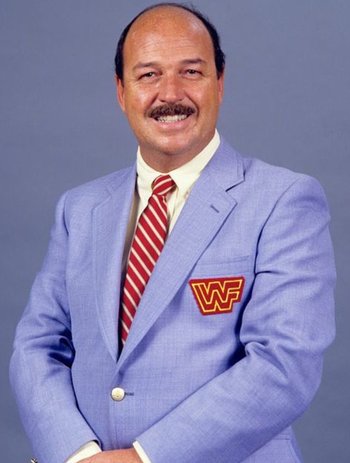 I'm forever on your side.

"The best partner I ever had. We never rehearsed or did anything scripted from a writer. Gene would ask me 'Hey big man, what do you want to do?' I would always answer 'Just follow you, brother' and it worked from 1980 - 2017."
— Hulk Hogan on Mean Gene following his death
Advertisement:

Eugene Arthur "Mean Gene" Okerlund (December 19, 1942–January 2, 2019) was a Professional Wrestling announcer, backstage interviewer, commentator and former wrestler. He got his start in pro wrestling working for the American Wrestling Association from 1970 until 1984, when he was picked up by the World Wrestling Federation, becoming the most recognizable voice of WWF's Rock 'n' Wrestling connection. He left WWF in late 1993 and was subsequently hired by World Championship Wrestling where he would remain until WCW was purchased by the WWF in 2001. Okerlund returned to WWF/WWE following WCW's demise and made occasional TV appearances and often appeared in documentaries. He was inducted into the WWE Hall of Fame in 2006, making sporadic appearances on WWE programming until his death in 2019.

Example of:
Celebrities Hang Out in Heaven