Celebrities Hang Out in Heaven 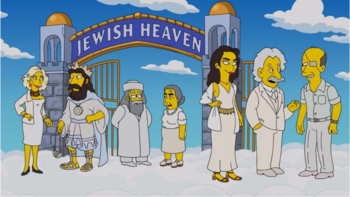 Joan Rivers, King David, Rabbi Hyman Krustofsky, Golda Meir, Gal Gadotnote Not dead but they like her so much, she gets to visit, Albert Einstein, and Moshe Dayan
Bart: I can't believe Krusty's really gone.
Homer: Don't worry, son. I'm sure he's up in Heaven right now, laughing it up with all the other celebrities: John Dillinger, Ty Cobb, Josef Stalin. I wish I were dead.
— The Simpsons, "Bart the Fink"
Advertisement:

When people think about going to Heaven, they often imagine reconnecting with family and close friends — the loved ones they actually spent their lives with. But when deceased celebrities are depicted in Heaven, they are usually hanging out with other famous people. This especially applies if the celebrities are in similar fields: artists, musicians, inventors, political leaders. They may want to trade stories and learn from each other. Also, given the time gap between the celebrities, some of them may be Fanboying.

The idea of "Rock and Roll Heaven" gets particular attention, due to all the rockers who went out in their prime, and just how awesome it would be. Even within that, expect at least one of a certain group.

If the deceased celebrities are Real Life Relatives, then this is a Justified Trope, and expect their reconnection in Heaven to be mentioned a lot in real-life obituaries.

This tends to overlap with Fluffy Cloud Heaven, as in the stock portrayal of the departed celebrities meeting up by the Pearly Gates. Might be the premise of a bittersweet Real-Person Fic, surrogate character optional.

Obviously, the people here are Dead to Begin With. See also Together in Death, Afterlife Welcome, and Ghost Reunion Ending. If this is portrayed in a poem or song, it is likely a Celebrity Elegy. If it turns out they're not really dead, then it could be a case of Elvis Lives. See also Jury of the Damned, in which infamous celebrities and historical figures gather together to serve on a jury.