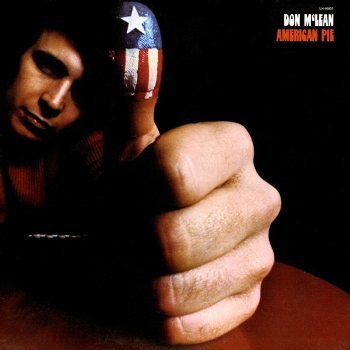 They would not listen, they did not know how, perhaps they'll listen now.
A long, long time ago
I can still remember how
That music used to make me smile
And I knew if I had my chance
That I could make those people dance
And maybe they'd be happy for a while
— "American Pie", opening lyrics
Advertisement:

American Pie is a 1971 album by Don McLean. It was his second, more successful album after his more moderately received debut album, Tapestry (1970). It's best remembered for "American Pie", a Celebrity Elegy written about the young death of rock 'n' roll stars Buddy Holly, Ritchie Valens and The Big Bopper. Although the singer has long admitted it's mostly about the death of these three musicians, other parts of the lyrics remained Shrouded in Myth for years, as McLean himself always refused to comment on its deeper meaning... until 2015 (see "The Walrus Was Paul" below). "American Pie" has become the singer's Signature Song, though the long song was originally released on a dual-sided single and radio stations back then only played the first part. "Vincent" also had some success, albeit more in the United Kingdom where it even became a number 1 hit song over "American Pie".

"American Pie" has become a Tough Act to Follow for McLean, since he never had such a commercial success again, except for one more top 5 single in 1980, "Crying". However, not many remember it.

Has nothing to do with the movie where the guy has sex with a pie.

And them good ol' boys were drinkin' whiskey n' rye, singin' "this will be the day that I trope"

They were singin'
"Bye-Bye, Miss American Pie"
Drove my Chevy to the levee but the levee was dry
Them good old boys were drinkin' whiskey 'n rye
Singin' "This will be the day that I die"...