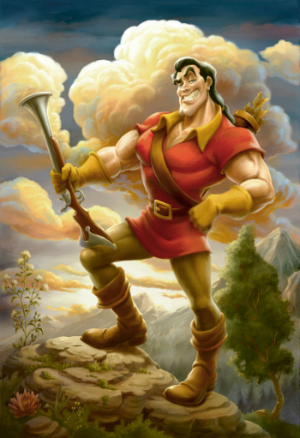 The blunderbuss is just for decoration. Real men hurl arrows at their prey with their bare hands.
The Jackal may follow the Tiger, but cub, when thy whiskers are grown.
Remember the wolf is a hunter - go forth and get food of thine own
— Rudyard Kipling, The Jungle Book
Advertisement:

Men who have become white-collar workers and achieved success lose the ability to fix cars, hunt, fish, plumb, or perform carpentry. It's not so much focused on how a specific ability makes you manly, but about how the lack of it makes you wimpy and how being "civilized" makes you lose your manly edge. Should they attempt to do such things — usually in a vain attempt to defy this very trope — they will fail spectacularly. This concept probably dates back to hunter-gatherer days: the way to prove you were an adult was to demonstrate that you can feed yourself and your family, and in those days hunting was the primary way of acquiring food. Just because nowadays people can get by just fine with butcher's shops and supermarkets selling cuts of meat taken from domesticated livestock doesn't mean that the original notion has gone away.

The Spear Counterpart of Feminine Women Can Cook. Compare A Real Man Is a Killer. Hunting involves killing other animals but has a different connotation from killing other humans. See also Real Men Eat Meat, where manliness is equated with eating said animals, and Real Men Cook if the hunter can also make a great steak out of his quarry when he's done.