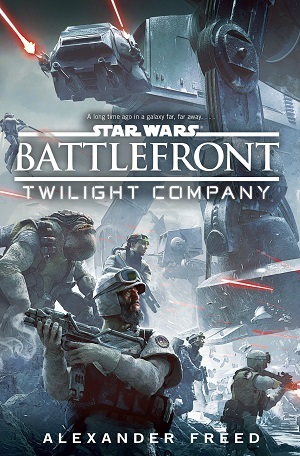 The Galactic Empire endures. Despite the destruction of its terrifying Death Star by the Rebel Alliance, its oppression spreads undiminished across the stars.
Advertisement:

Under the direction of the Emperor and Darth Vader, an army of highly trained, single-minded stormtroopers quashes dissent and destroys resistance.

But on worlds like Sullust, Coyerti, Haidoral Prime, and untold others, rebel forces fight in the trenches, determined to maintain hope against the unrelenting Imperial war machine...

Battlefront: Twilight Company is a novel set in the Star Wars expanded universe. Written by Alexander Freed and released on November 3, 2015, the novel ties into the videogame Star Wars: Battlefront.

Following the destruction of the first Death Star, the Rebellion began a large-scale military campaign against the Empire in the Mid-Rim. Months later, the soldiers of the Sixty-First Mobile Infantry, better known as Twilight Company, have been fighting at the front of the rearguard action as the Rebellion desperately retreats and abandons all the gains they made. On Haidoral Prime, First Sergeant Namir Hazram and his squad encounter Governor Everi Chalis, an efficiency expert who was disgraced following the Death Star's destruction. Offering her knowledge of the Empire's supply lines and infrastructure in exchange for a pardon, the men and women of Twilight Company must decide if they can trust the information Chalis is offering and use it to strike a major blow against the heart of the Empire's war machine.