Due to its nature as a sequel, spoilers for Horizon Zero Dawn and The Frozen Wilds DLC will be unmarked. You have been warned. 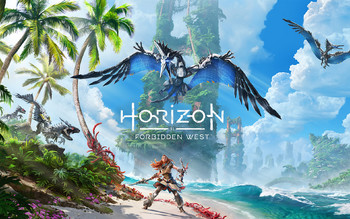 Rise above our ruin.
"There's nothing I wouldn't do to save this world; no depth I won't explore, no secret I won't unlock, no barrier I won't cross. This mission is mine alone. If I falter, if I fail, there won't be anyone left to stop what's coming."
— Aloy
Advertisement:

Announced during the PlayStation 5 reveal event on June 11, 2020, Horizon Forbidden West is the sequel to 2017's Horizon Zero Dawn. The game sees the return of its original protagonist, Aloy, as she strikes out into the Forbidden West, the mysterious land far beyond the world she knows, from which none have returned before.

In the six months following the events of Zero Dawn, the Derangement has continued, freak storms are appearing with greater frequency, and a mysterious blight is spreading across the land, killing flora and fauna alike. Aloy continues to scour the world for a backup of GAIA to fix the terraforming system and save the world, but with no success.

When confronted with the betrayal of a former ally, Aloy realises that to find the answers she needs, she must journey into the Forbidden West: a harsh and lawless land, ruled by the violent Tenakth tribes and new, more dangerous machines. Her journey uncovers new secrets, new technologies and new enemies, and will challenge everything Aloy believes about her mission — and herself.

Initially set to come out in 2021, the game was delayed and instead came out on February 18, 2022. The announcement trailer can be seen here

, and a developer message - here

. The State of Play Gameplay Reveal can be found here

. The Story Trailer can be found here

Slitherfangs are a gargantuan, acid-spitting species of Machine created from Project Zero Dawn.

Example of:
The Great Serpent

Slitherfangs are a gargantuan, acid-spitting species of Machine created from Project Zero Dawn.