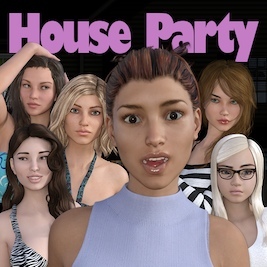 Not pictured: Amy, Leah, any of the men.
Advertisement:

It's a weekend evening, and your best friend Derek has just invited you over to a house party to meet some new people and have some thrills. And possibly to get a little action as well.

That's really the entire story. You're just playing as yourself and are otherwise given free rein of how you want to spend your time in the house. Besides yourself and Derek, there are ten other party-goers to get to know:

Several real-life personalities have been added to the game in updates. The Game Grumps, whose playthrough helped bring the game popularity, now have their own storyline in the game after winning a contest held by Eek! Games, the other winner and additional character being streamer Lety Does Stuff. In 2022, a storyline featuring Doja Cat was added to the game.

House Party is currently in early access on Steam with a planned full release (plus a female player option) in May 2022.