You Could Have Used Your Powers for Good! 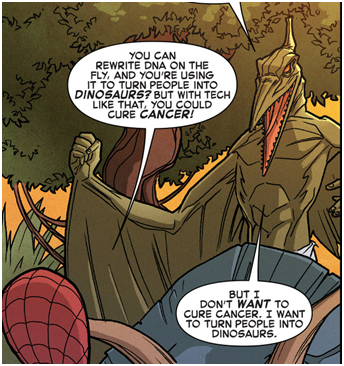 But Sauron, you're a pterosaur!
She-Force: You should use your powers for good.
Lightkiller: Yeah, yeah, right. So being able to plunge the world into complete darkness is an ideal power for a good guy, right?
— No Heroics
Advertisement:

"You Could Have Used Your Powers For Good/Evil" is a sentiment often expressed to the Worthy Opponent. Hero Bob wonders why Villain Alice, with her immense power, chose to do evil rather than good. If the evildoer is a recurring character, rather than a one-shot, this usually comes followed by a conversation about how they're not so different and a Heel–Face Turn would make her feel much better about her life.note (Mind the Redemption Equals Death)

Of course, the reverse can also occur, with Alice questioning why Bob bothers to protect these ungrateful weaklings when he could just use his powers to take whatever he wants. If Alice succeeds in convincing him that Evil Feels Good, Bob may become a Fallen Hero.

As the page quote illustrates, this is more appropriate for some villains than others. Usually they need to have "good" powers yet use them for evil. Of course, Bob can try to convince Alice that even with "bad" powers, With Great Power Comes Great Responsibility and she can be a good person. If Alice is a Mad Scientist, cutting her a check while commenting how all her evil inventions are useless can have this effect.

Compare Recruiting the Criminal, Win Your Freedom, and Boxed Crook, where a villain is forced into acting for good; also Cut Lex Luthor a Check, where acting good would have obvious monetary benefits. If the character listens to this advice, they're a Moral Pragmatist. See Mirror Character.

Alternative Title(s): You Could Have Used Your Powers For Evil