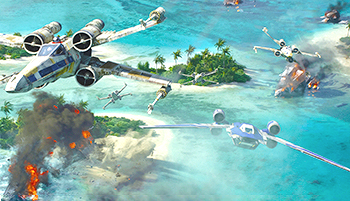 "To all my Rebel friends, fly on over to sunny Scarif, it's a blast!"
"He was distressed to think that something so nasty could happen somewhere as idyllic as this."
— Life, the Universe and Everything
Advertisement:

A form of Mood Dissonance, this is when either:

For the former, the impact of the whole can be more than that of the sum of its parts, whether because it seems a waste that the character's enjoyment of the scenery is curtailed by the situation, or for whichever other reason. For the latter, it can be used to indicate that hope is not lost, even when it seems otherwise.

Compare Crapsaccharine World when the pleasantness of the setting as a whole conceals its rotten nature. See also Daylight Horror, Snow Means Death (when the beauty of snow is used to further highlight a tragedy), Dangerously Garish Environment (when the pleasantness of a location hides underlying terrors even if no unpleasant scenario is happening), and A World Half Full (when a cynic, gritty setting still harbors snippets of hope). Contrast Empathic Environment.

Other types of mood-clashing scenery: