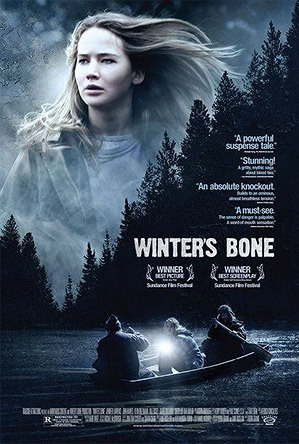 A 2010 mystery drama film directed by Debra Granik, based on the novel by Daniel Woodrell.

Jennifer Lawrence stars as 17-year-old Ree Dolly. With an absent father and a mentally ill mother, Ree is left to raise her two young siblings in a rural, Ozark community. One day, she learns that her father has put up the family home for his jail bond and disappeared. If Ree does not locate him within a few days, the family will be evicted. As Ree begins asking questions about her father's fate, she encounters increasingly violent resistance from local residents, all of whom are wrapped up in the meth trade.

The film and novel share some similarities with the story of Antigone since both female protagonists have to bury their relatives and must undergo a 'test' of sorts while journeying to do so received very positive reviews (garnering a 94% on Rotten Tomatoes and a 90 on Metacritic) and Jennifer Lawrence's portrayal was especially praised (this was two years before she became famous as Katniss Everdeen).