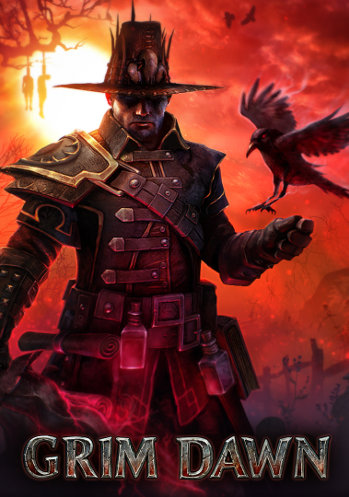 This is one of the good guys.
"Enter an apocalyptic fantasy world, where humanity is on the brink of extinction, iron is valued above gold and trust is hard earned."
Advertisement:

Grim Dawn takes place in the world of Cairn, where humanity is caught in between an eternal war between two otherworldly forces: the Aetherials, who seek to use human bodies as a resource to take over the world; and the Chthonians, creatures from the void who seek to wipe out humanity before the Aetherials can use them. Their war has brought the world of Cairn to the brink of destruction. For humankind, it is the dawn of a grim new age where iron has replaced gold as currency and the great civilizations of old are nothing but a memory.

Small enclaves of human survivors exist scattered throughout the world, holed up in refuges. These humans have quietly watched the warring invaders destroy one another and have become wise to the strengths and vulnerabilities of their otherworldly foes. A few survivors have begun to exhibit strange new abilities after surviving possession or exposure to the Aetherials. The unnatural powers of these survivors, occasionally called "Taken", are feared by some, but also give a new hope of launching a resistance to fight the "outsiders" and reclaim what is left of their world.

You start the main Grim Dawn campaign off as an Aetherial-possessed human who was captured by a group of humans seeking refuge at Devil's Crossing, a prison with road access to many parts of Cairn that have since been destroyed or overrun by the Aetherials and their possessed human slaves. The leader of the refugees, Captain John Bourbon, gives the orders for you to be hung, but as you hang by the noose, the Aetherial possessing you escapes. Bourbon then cuts you from the noose despite some protests from the other refugees. When you awaken, you are given some basic equipment by the refugees at Devil's Crossing and are free to explore the world with your newfound abilities as a Taken, although you can choose to complete quests that will hopefully aid the remaining human survivors in ultimately stopping the Aetherial and Cthonian war which threatens to destroy Cairn entirely.

Similar to Titan Quest, the player can initially choose one out of several different classes, known as "Masteries", each focusing on different gameplay styles. At a slightly higher level, the player is given the choice to select a second Mastery to specialize in, allowing them to hybridize their character based on their own play style.

These 6 Masteries are included in the original game:

DLCs available for the game are The Crucible, which adds a survival mode that pits your character against 170 waves of enemies, with greater rewards for more waves your character defeats, and two Loyalist Item Packs that add a variety of (mostly) cosmetic equipment.

An expansion, titled Ashes of Malmouth, was released on October 12, 2017, and included two new Masteries: the Inquisitor, who specializes in combining Guns Akimbo with magic bullets and elemental traps, and the Necromancer, who focuses on raising skeletal minions as well as using arcane attacks and spells. The plot in Ashes of Malmouth centers around the Taken working alongside the Black Legion to assault the city of Malmouth, which has been converted into the Aetherials' main base where their leader, the Shaper of Flesh, is on the cusp of creating a new weapon that could shatter the human resistance and complete the Aetherial takeover of Cairn.

A second Expansion Pack, titled Forgotten Gods, was released on March 27, 2019 and features the divinely-empowered Oathkeeper mastery as well as the Shattered Realm, a Bonus Dungeon themed as a distorted Mirror Universe with unfathomable wealth and horrors. In Forgotten Gods, the Taken is approached by the cults of the Witch Gods to confront a great evil in the Korvan Basin, an abandoned, sandy region to the far east of Cairn, whose resurgence would signal the destruction of not just Cairn, but possibly the Eldritch realm itself.

No relation to the 2018 Psychological Horror game Gray Dawn.