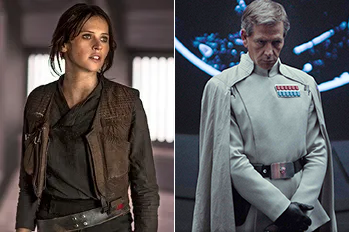 Among the many ways of visually distinguishing heroes and villains, there has always been a quick technique: making use of the varying quality of clothes.

Countless stories depict heroes wearing casual clothes or serving as living embodiments of the Rummage Sale Reject, if not outright decked out in rags, while the villains dress as stylish and/or high-end as they come. There are many ways to display this trope: The Rebel Leader may wear a patchwork cloak while the Evil Overlord wears a jewel-encrusted cape, or the Working-Class Hero may wear a pair of overalls every day while the Corrupt Corporate Executive has a closet full of suits. No matter what, the general class difference that fuels this trope is always present - the usual explanation is that heroes are La Résistance against the villainous establishment, whether The Empire, a Mega-Corp or something else. Another is that our heroes come from a lower-class background (if not outright social pariahs/criminals) while the villains are high-class and wealthy (if not outright Aristocrats Are Evil). In short, our heroes are underdogs and their choice of clothing shows it.

This can overlap with Rummage Sale Reject, Limited Wardrobe, Homeless Hero, Man of Wealth and Taste, Wicked Cultured, and/or Slobs Versus Snobs.

A Sub-Trope of Dress-Coded for Your Convenience and Sliding Scale of Shiny Versus Gritty.