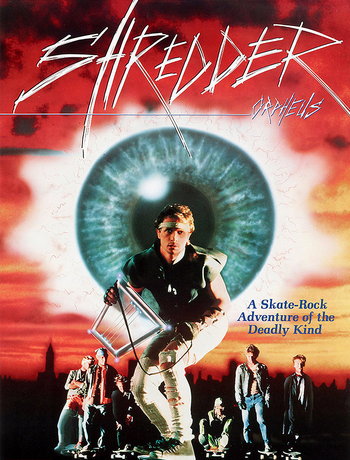 Shredder Orpheus is a cult indie film by Robert McGinley that retells the myth of Orpheus and Eurydice in a 1980s post-apocalyptic dystopia. Filmed entirely in Seattle, it's self-described as absolutely bonkers.

In the Grey Zone, the 99 percent is barely hanging on, distracting themselves from the cost of survival with the soothing rays of Hades' Euthanasia Broadcast Network, or EBN. Looking to boost youth ratings to hasten the effects of his deadly television signal that sucks the souls out of the living, Hades has his crew murder the dancer Eurydice and take her to the broadcasting underworld.

With a gang of rebellious skateboarders by his side and armed with a Gibsonian Lyre-Axe Guitar, it's up to the rock-and-roll star Orpheus Hellenbach to storm Hades' network, free Eurydice, and save the world in the process.